H.A.R.T. started in 1995 as just a few friends launching small model rockets over the local park. They then decided to put a leaflet in the local model shop and the club was born, it quickly grew to over 30 members who met and launched rockets at least once a month.

A newsletter and web page soon followed, and H.A.R.T. continued to grow and reached a global total of over 200 members, made up of people of all ages and experiences coming from all over the world, we have members in USA, France and Holland to name just a few.

The H.A.R.T. meetings became a family day out, with children and wives also becoming hooked on rocketry,  and they soon started to build and fly their own models.

The club quickly became well known and was soon being asked to do rocket displays and workshops by schools, model shows and other events.

H.A.R.T. then started to appear on Television as they helped to make an episode of Channel 4’s “Scrapheap Challenge”, and then we helped with the making and then competed in all 4 series of the BBC2 Television programme “Technogames”, coming away with Gold, Silver and Bronze medals in the various rocketry events as well as setting the current Rocket Car World Record (35 metres in 1.037 seconds – top speed of 153 M.P.H.) 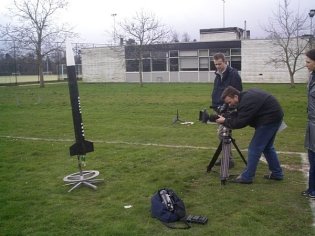 H.A.R.T. has had it’s rockets filmed for other Television programmes, including the Royal Christmas Lectures and several Science and hobby TV shows, as well as being on a number of radio stations and appearing in various newspapers and magazines.

Over the years H.A.R.T. has also managed to do an number of special things, including doing a rocket launch live on T.V. for Comic Relief (Red nose Day), getting a model rocket through the sound barrier (mach 1, 760mph) and launching several staged and clustered engine rocket flights.

The club has done numerous rocket displays and workshops for large model shows in front of crowds of over 10,000 people and was also part of the Thunderbirds movie premiere in London.

H.A.R.T. members have built a range of different and exciting rockets over the years, they include flying scale models of the Thunderbirds rockets, various Star Wars and Star Trek space ships and replicas of the N.A.S.A. Apollo rockets and Space Shuttles.

As well as normal flying rockets, H.A.R.T. has made many rocket dragsters and boats for racing along the ground and over (and sometimes under) water !

Other rockets have been designed for specific contests and events, these include Egg lofters, Odd Rocs, i.e. strange looking rockets  (these include rockets shaped as a Brick), as well as Duration and Spot Landing rockets.

H.A.R.T. or the Hornchurch Airfield Rocket Team, as we are more formally known, now spend most of our time visiting schools and other groups / clubs to encourage and provide support and guidance for anyone to enter into this exciting world of model rocketry.